Disbelief, sighs of relief, and a reminder to always read the fine print.

This week, Bored Ape Yacht Club came closer to revealing its next project (and raised some hackles in the process) and casually snapped up the IP rights to CryptoPunks and Meebits, Joseph R. Biden Jr. gave many NFT collectors and cryptocurrency traders reason for a sound night’s sleep, and various new projects arrived and boomed, bear market be damned. It’s been a jam-packed seven days, and we’re here to help you make sense of them.

Right, let’s get straight into it!

The biggest news in the world of NFTs this week can be abbreviated to “BAYC x KYC.” Bored Ape Yacht Club shared a link that takes users to a page with Yuga Labs (which makes BAYC) and Animoca branding. There it asks visitors to connect their Metamask wallet and then fill in a know your customer (KYC) form with their real name, date of birth, verifiable address, and to supply a copy of a passport, ID or driver’s license.

In a space where anonymity and privacy are prized by many, identity theft is a huge problem, and not being subject to the regulatory hurdles of conventional finance is seen as not just a selling point but a cornerstone, that understandably led to plenty of opprobrium.

So, what’s this for? BAYC says the wallet users link needn’t have an Ape (or related) NFT in it, and that it’s only fulfilling its regulatory obligations… but it hasn’t revealed much more than that. The clue is in the tie-up with Animoca, which is the main investor in The Sandbox and a range of other NFT businesses and gaming companies.

Bored Ape Yacht Club @BoredApeYC
This has been building over the last seven months. @animocabrands will launch the first phase, and there’s more to come. P.S. we don’t like KYCs either, but we think you’re going to want to be a part of this.

Is the something that’s brewing a game, a world in the Sandbox, a range of Amiibo-like Apes? Perhaps it’s all of the above. We don’t know yet, but we expect more details will trickle out in the weeks to come as BAYC tries to mollify its community.

Yuga Labs @yugalabs
Some big news to share today: Yuga has acquired the CryptoPunks and Meebits collections from @larvalabs, and the first thing we’re doing is giving full commercial rights to the NFT holders. Just like we did for BAYC and MAYC owners.

That’s right, Yuga Labs has acquired the IP of the CryptoPunks and Meebits collections from Larva Labs, and it’s handing it over to owners of the respective NFTs. The fact that Larva Labs hadn’t done so itself has been a major bone of contention for Punks and Meebits holders, and saw many longtime holders sell their Punks in protest. In short, this is huge. It’s worth reading Larva Labs’ explanation of how it made the decision on its blog.

Starting on Monday, March 14, we’re going to be hosting weekly Twitter Spaces conversations with movers, shakers, tastemakers, and innovators in the NFT space. The session will kick off at 9 p.m. ET / 6 p.m PT and you can set a reminder here.

We’re calling the sessions “Art of the Matter,” and the first will see hosts Craig Wilson and Jessica Angel talking about the value of communities in the NFT space with Judy Mam (the driving force behind collaborative art platform DADA) and crypto artist, writer, and metaverse architect, Stellabelle. You don’t want to miss it!

On Wednesday, U.S. President Joe Biden signed an executive order on cryptocurrencies (you can read the whole thing here). The order will see the Treasury Department investigating the “future of money,” and encourages federal agencies to coordinate their efforts to regulate and legislate crypto, without going so far as to dictate what sort of positions they take.

The order doesn’t include new regulations, nor does it paint cryptocurrencies as either purely good or bad. Instead, it focuses on “six key priorities,” which include: protecting U.S. interests, ensuring global financial stability, clamping down on illicit activities, prompting both financial inclusion and so-called “responsible innovation,” and ensuring the U.S. is positioned to lead the global economy when it comes to digital instruments and assets.

Not only does the announcement demonstrate the government is paying attention, but it’s an acknowledgment that cryptocurrencies (and, by proxy, adjacent and related sectors like NFTs and DeFi) aren’t going anywhere and have an undeniable and inescapable role to play in the future of international finance.

It’s also good news for U.S.-based crypto mining operations, entrepreneurs, traders, HODL’rs, and whales, some of whom were doubtless watching with bated breath and go-bags packed, ready to flee to Portugal (which has no tax on crypto gains) had Biden’s announcement gone the other way.

Does this mean the tide couldn’t still change? Of course not, but for now it’s an invitation to the crypto sector to continue building and innovating. We’ll take it.

Charge it to my Gemini 💳

Gemini, the cryptocurrency exchange owned by the Winklevoss twins (and which, in turn, owns NFT marketplace Nifty Gateway) has launched its credit card. It’s been teasing it since last year, but now it’s started to actually invite some people on the waitlist to apply for the card, which comes in fetching hues of black, silver, or rose gold.

Holders will receive rewards in one of 50 cryptocurrencies of their choice as soon as transactions post (and can change which currency they receive at any time). They’ll get 3% back on restaurant purchases (up to $6,000 per year, after which they’ll get 1%), 2% back on groceries, and 1% back on everything else. The card has no annual fee and is backed by Mastercard.

You love to Sia it 👁

Australian singer, songwriter to the stars, and surnameless songbird, Sia, announced this week that she’s the force (and finance) behind NFT collector @BiancaMedici69.

sia @Sia
I am @BiancaMedici69

The superstar posted a thread to her alter ego’s Twitter explaining she first got into the crypto space in 2016, went on to become a “total degen,” and loves the space because, as an artist, she appreciates “any medium that allows people to express who they are inside.”

The last seven days saw CyberBrokers top the charts ahead of BAYC. Other surprise action came from DourDarcels (in third place) and Dippies (in sixth). Meanwhile, Clone X, Invisible Friends, and Azuki continued to hold firm in the top 10, albeit with the usual shifts in their respective positions we’ve come to expect from what remains a wildly volatile and unpredictable market.

Kevin Roose @kevinroose
Before I tweeted this 6 months ago I remember literally thinking "I have to give this satirical NFT collection an extremely dumb name so no one actually builds it." And yet!

Once upon a time, LimeWire was a way for cash-strapped teenagers (or enterprising adults) to get digital music without paying for it. Eventually, like pretty much every other torrent service, it got shut down. Now LimeWire’s plotting a return, this time as a *checks notes* music-focused NFT marketplace. Wait, what?

That’s right, a name synonymous with music piracy has been sold off, dusted off, and affixed to a marketplace for blockchain-ified music and an accompanying token. We’ve got to give the team who bought the hollowed-out shell of LimeWire credit for their chutzpah. Trying to leverage the remaining nostalgia surrounding a once iconic brand by turning it into pretty much the antithesis of what it once stood for sure is bold.

Sometimes all you need to know about a project is conveyed by its name. “Pooping Ladies NFT” is one such shitshow initiative. This horrorshow slid into our DMs this week (and many other people’s, looking at Twitter), and let’s just say we’re glad you can only see thumbnails below.

Aside from the inherent tastelessness of the concept, it looks like all of these “hand-drawn” images were simply grabbed from the internet and run through a Photoshop filter. It’s even more reprehensible this arrived in the same week as International Women’s Day. This may well be the worst instance of NGMI energy we’ve ever encountered. Thank heavens there are only 100 of them. Perhaps, once they’ve got to zero (or near it) some charitable soul will buy the lot and burn them. Because short of being flushed down a toilet, that’s the fate they deserve.

CyberBrokers dropped a fully on-chain collection of NFTs (which means all of the character elements and art are stored on the Ethereum blockchain) at the beginning of
March. It sold out in no time, despite a mint price on the higher end (0.35 ETH, or nearly $900). Those who minted items and hung onto them —or those who pounced on the ones that turned up on the secondary market — were rewarded handsomely: this week the floor price has soared to nearly 3.4 ETH (~$8,600).

Bryan Brinkman @bryanbrinkman
Minted some @CyberBrokers_ this evening. Been anticipating this project for what feels like forever. Incredible art + fashion plus it's on-chain svg ✨ Congrats to @josie & team on the launch.

Crypto McSteamy M.D. @CryptoMcSteamy
I recently finished the daunting task of reporting my NFT taxes. If you’re a Degen like me, this is a grueling and confusing process, and other guides on the internet make it seem much simpler than it really is. For these reasons, I put together this How-To tax thread 👇 1/20

Whether you’re doxxed or anonymous, a flipper or a shiller, you should be watching or listening to Goats and the Metaverse.

In each episode, collectibles OG and entrepreneur Stan “The Goat” Meytin and Metaversal co-founder and CEO Yossi Hasson talk about digital and IRL collectibles, NFTs, and the week’s news worth knowing. This week they take a deep dive into the CyberBrokers NFT project, share their take on V Friends Season 2, and delve into the BAYC x KYC debacle. Check out the latest episode here:

Aside from providing invaluable insights into digital art and collectibles, Stan and Yossi have put together a collection of NFTs called “The Goat Vault.” When the show hits 5,000 subscribers on YouTube, one of those lucky subscribers will win the contents of the vault which, at last count, was valued at over $56,000.

Prefer listening? Check out Goats and the Metaverse on Apple Podcasts, Spotify, Anchor, or wherever you get your podcasts.

A couple of weeks ago we told you about a forthcoming project we’d been working on for iconic horror production company Crypt TV. The project is called “Monster Fight Club” and this week its website went live, bringing us ever closer to the launch.

The site has a lot of the key details, but if you really want the scoop on what’s coming, how to get involved, and how to secure a mint pass, you’ll want to join the Crypt TV Discord.

Each week we offer you a look at an NFT project we’ve invested in and the motivation behind it. This week it’s the turn of the instantly recognizable “Hairpepe.” 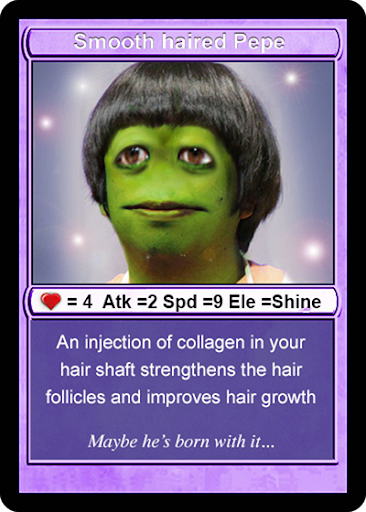 HAIRPEPE | Series 1 Card 18 View contents of NFT by expanding Properties Below and at Emblem.Finance 👇 [View this NFT on Emblem.Finance](https://emblem.finance/nft?id=85641473659706241) XCP Exp…
Created by Emblem-DeployerView on OpenSea

The eagle-eyed among you may notice this is the second RarePepe card we’ve featured. That’s because not only do they pre-date CryptoPunks, but some of them (like this one) are only available in very limited quantities. They represent early milestones on the NFT highway, and we believe they’re only going to become more valuable (economically and culturally) in years to come. Plus, that’s a timeless hairdo right there.

Don’t put all your rocks in one basket frens 🧺

Rock dust 😭 @dino_dealer
How's your week? Mine? I just erroneously listed @EtherRock #44 for 444 wei instead of 444 eth🤦‍♂️ Bot sniped it in the same block and trying to flip for 234 eth In one click my entire net worth of ~$1 million dollars, gone Is there any hope? Am I GMI? Can snipers show mercy?

Until next time, see you in the Metaverse.